The Executive and Management extend a very warm welcome to members, affiliated members and their guests.

We have many fishing contests. There are open competitions in which non club members are welcome to participate. We encourage families and children who also may be interested in joining so their children can participate in our programmes.

Visitors are most welcome to come and view one of the best fish mount collection in the North Island and enjoy the friendly atmosphere.

Please feel free to talk to our Management or a Member.

A brief history of the Hawke’s Bay Sports Fishing Club . . . .

50 years ago, a group of 22 keen recreational fishermen (representing 18 boats) who often met regularly out on the ocean or on the shoreline due to their common love of fishing and boats, decided to form a fishing club. In March 1964 the first AGM of the Hawke’s Bay Game and Off-Shore Fishing Club was held.

Initially, club headquarters was a shed at the Napier Sailing Club and after being sick and tired of having to bring their boats through the mud at the Sailing Club and after a lot of wrangling with the “right” people, the Club was very fortunate to procure a site for a multiple ramp -and clubhouse adjacent to the Iron Pot. With a lot of enthusiasm and determination, the site was prepared and the purchase of an old house from Westshore provided the clubhouse. IIt was moved on to the site in May 1965.

By November of that year, after a lot of physical work and sacrifice by many of those founding members, the ramp was ready for use and the official opening of the new facilities took place in December 1966. Membership at that stage had increased to 350.

November 1967 saw the tide flow again into the Iron Pot which gave the go-ahead for the construction of the Club’s floating marina – another big project for the Club involving many hours of voluntary work by members. This marina, although now rather “tired”, continues to provide moorings for 16 Club boats.

The Club became affiliated to the New Zealand Big Game Fishing Council in 1971 and has continued to be so ever since. That body now has just on 60 affiliated clubs from all around New Zealand which are split into zones with two representative delegates from each club, and each zone nominating a representative delegates on the Management Committee.

The Club’s name was changed in 1975 to the Hawke’s Bay Game Fishing Club. and the continued success of the Club provided the ability and need to build a new clubhouse. With again voluntary input by club members in building the foundations, the original Lockwood portion of the current clubhouse was built under contract and was finally opened in June 1977.

Upgrading of the clubhouse continued through the years with a further large extension to the front completed In June 1983; and then in 1991, extensive renovations and extensions were made to the Club’s bar facilities and ablution block at the rear.

A major update was made in 1992 to the Club’s constitution and this included a further name change to the Hawke’s Bay Sports Fishing Club which better reflected the range of fishing that was being undertaken by members.

In 1996 further development occurred when yet another keen team of volunteer club members laid paving stones outside and added a deck to enhance the clubhouse and provide better outdoor facilities for members during the hot summer months.

Throughout 1999 and 2000, the Club embarked on a major project of totally renewing its ramp and extending It’s boat parking facilities. This was a huge project that Involved years of prior planning and a lot of fundraising and financial commitment by the Club. This was successfully completed at – a cost of $1.2 million and through a huge voluntary effort by a team of very dedicated Club members, working weekend after weekend, the floating pontoons were constructed and this finally completed the Club’s massive Ramp Development Project which was officially opened in September 2000.

While the clubhouse will never be big enough to solely accommodate the Club’s major open competitions, it was becoming clear that it wasn’t big enough for even regular club competitions. Consequently in March 2004, after various options had been debated, a Special General Meeting of members agreed to embark on yet another major development project of extending the clubhouse further. Work began later that year to provide the extra space required. During construction, a decision was made to also move and upgrade •the kitchen, and provide much Improved dining facilities, taking advantage of the superb location and views across the I inner Harbour.

Membership currently stands at over 1100 with several new members joining each year. The Club boasts a magnificent display of mounted fish and is very proud of the vast variety of species displayed on the walls of the clubhouse.

Each year, between September and April, the Club holds 5 Club Competitions (for club members only), 4 Open Tournaments (open to both members and non-members) and a couple of Kids Wharf Fishing contests for our under 10 year-olds. Entries range from 150- 200 in our smaller club competitions, to over 450-600 anglers in our large Opens.

The Club is well-supported by sponsors, with over 100 generous sponsors providing much-needed cash, product and services to enable the Club to offer what it does to its members.

In the off-season, the Club has an active Entertainment Committee that organizes a wide-range of social activities – Trivial Pursuit Nights, Dine & Dance, Wine-Tasting, Car Railey and various fun events around the super 14, Tri-Nations and NPC Rugby matches televised on the Big Screen at the Club.

Progress just doesn’t stop at the Hawke’s Bay Sports Fishing Club. Innovation, dedication and teamwork have been priorities for Club members throughout its 50 years of existence and the Club is confident that this will continue for many years to come. 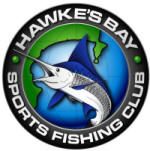