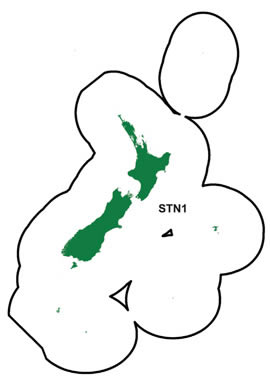 Nathan Guy, the Minister for Primary Industries, has ignored the precautionary approach and granted a 69 tonne increase in the commercial catch level for the 2013-14 fishing year, and has increased total catch limit from 830 to 1000 tonnes for the 2014-15 fishing year. Read Nathan Guy’s decision for Southern bluefin tuna here….

They spawn in the Indian Ocean south of Java around March.

The years from 1999 to 2002 seemed to be particularly bad spawning years with better numbers, from more recent spawning seasons, now showing in NZ.

Current spawning stock size is at or below 5% virgin, unfished biomass, stock size according to the most recent stock assessment in 2011. This stock level is well below what is required to produce Maximum Sustainable Yield (MSY).

Southern Bluefin tuna can live up to 30 years old and reach a maximum size of about 190cm and 140kg by 20 years old. Most fish are mature by 12 years of age.

The recreational all tackle world record is a 158kg fish caught in the Bay of Plenty.

Japanese longliners were catching 1000s of tonnes of Southern Bluefin tuna every year, around NZ, between the 1960s and 1980. Most of this catch was taken prior to the establishment of the Exclusive Economic Zone (EEZ).

There was a small recreational fishery based out of Fiordland and Southern Bluefin tuna are taken as bycatch of the Pacific Bluefin tuna fishery out of Greymouth and Hokitika.

In early November 2013 the Ministry for Primary Industries proposed the Total Allowable Catch (TAC) be set to the level of New Zealand’s allocation set by the Commission.

The NZ Sport Fishing Council do not support the proposed TAC increases. Any increase ought to be held off until there is evidence that the stock has rebuilt to at least 10% of the unfished biomass, stock size, in accordance with the precautionary management approach, which is often mentioned, but seldom followed, in international fisheries management.

Nathan Guy, the Minister for Primary Industries, has ignored the precautionary approach and granted a 69 tonne increase in the commercial catch level for the 2013-14 fishing year, and has increased total catch limit from 830 to 1000 tonnes for the 2014-15 fishing year.

The NZ Sport Fishing Council advocate there is no justification for Nathan Guy, the Minister for Primary Industries, to increase the TAC by 138% over five years for a fish stock that was recently assessed as being at or below 5% of its unfished biomass.

The Ministry for Primary Industries propose one option to increase the commercial catch levels for Southern Bluefin tuna, for the next two fishing years. No other options are being considered. MPI notes these increases will provide maximum benefits to New Zealand quota holders.