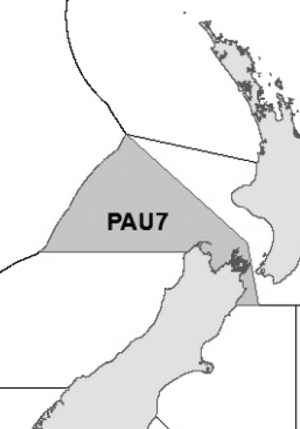 On June 10th the Ministry for Primary Industries (MPI) advised they were consulting on options for the future management of the Paua 7 fishery at the top, east and west coast of the South Island.

MPI has proposed three options, one being the status quo, the other two require substantial cuts to the commercial catch limit. Submission deadline is 11 July 2016.

The New Zealand Sport Fishing Council will be submitting a response to the proposals. We again object to the short consultation timeframes offered by the Ministry. This time we had 21 working days, which is inadequate for us as a volunteer organisation to firstly understand the proposals, prepare a response, and then talk with affected members and supporters in the Southern regions.

To aid the discussions the Council has compiled a Preliminary View on Paua 7 outlining the first issues we identified as needing attention. A submission is underway and will be posted online after it has been sent to the Ministry.

What follows is our record of the process and the Council’s response. As other relevant documents are made available they will be posted online.

The Paua 7 discussion and recommendations are on pages 123 to 148.

The New Zealand Sport Fishing Council submits in support of the Ministry’s and paua industry’s call for cuts to commercial harvesting to rebuild the Paua 7 fish stock. The Paua 7 stock has been below target stock size for nearly 20 years. Low abundance is impacting on recreational harvest. The NZSFC objects to shelving. There is no statutory support for shelving, the Minister is responsible for rebuilding and maintaining Paua 7 in an abundant state.

The New Zealand Sport Fishing Council has reviewed the Ministry’s proposals for the future management of PAU7 and recommend support for MPI’s option 3, to reduce the Total Allowable Catch (TAC) from 220 tonnes to 115 tonnes. Option 3 also requires a 60% cut to the Total Allowable Commercial Catch (TACC), from 187 tonnes to 75 tonnes. The Council rejects any notion that shelving of catching rights is appropriate given the depleted state of the fishery.

The Ministry for Primary Industries (MPI) proposes three options for the future management of Paua 7. Option one is the status quo. Option 2 is 40% reduction of the TACC. Option 3 is a 60% reduction of the TACC. Both the Ministry and paua industry have been concerned about the declining stock and low catch rates. MPI advise there is a need to reduce the level of catch in Paua 7 because the stock is now below the “soft limit”, meaning it is estimated to be about 18% of its original, unfished stock size. A long way to go to get back to the default minimum of 40%.

The Ministry for Primary Industries (MPI) advises it is consulting on management measures for a range of fish stocks, including Paua 7. Submission deadline is 11 July, leaving us 21 working days to read the proposals, do our research, consult with our members and supporters and write a submission. From our perspective that timeframe is inadequate.