Existing management procedures are being used to increase the Total Allowable Commercial Catch (TACC) in CRA 7 (Otago), while a decrease is proposed for CRA 5 (Canterbury/Marlborough) and CRA 9 (west coast Kaipara to Franz Josef).

The Ministry for Primary Industries seeks information and comments in writing on the proposals. Submission deadline is 17 February 2015.

On the 19th of March Nathan Guy, the Minister for Primary Industries, announced his 2015 crayfish decision to increase commercial catch levels in the Otago (CRA7) area, and retain current catch limits in the Gisborne (CRA3), Canterbury/Marlborough (CRA5) and Westland/Taranaki (CRA9) areas. All concessions enabling commercial harvest of undersized crayfish remain, those regulations are scheduled for review later this year.

On the 18th of February the New Zealand Sport Fishing Council submitted in response to the current management proposals for our crayfish stocks. We are concerned that large numbers of new recruits, just-legal crayfish, are being killed each year in some areas due to commercial fishing.

We also submitted that recreational harvest is being constrained by low levels of availability, small animal size and the concession granting commercial fishers access to undersized rock lobster. While these concession remain in place the Council will reject any increase in commercial catch levels in the affected areas.

The New Zealand Sport Fishing Council has an experienced fisheries management, science, policy and legal team who are reviewing the proposals. A technical summary of the proposals has been completed and is available below.

Once again time has been used as a weapon against us, this year (and last) we were only given 18 working days to respond to these complex issues. Again, we will object to this short submission period that denies us the opportunity to adequately consult with our members and supporters, gather their feedback and assimilate that information into our submission.

However, as with all our submissions, we will be striving to present cogent arguments to assist the Minister for Primary Industries, Nathan Guy, to make a reasonable decision that complies with, and sets to achieve, the purpose and principles of the Fisheries Act 1996.

This is a collection of documents relevant to this current management review process. Further details are available about crayfish review processes from 2010 to 2014.

Nathan Guy, the Minister for Primary Industries, has decided to increase commercial catch levels in the Otago crayfish area, and retain current catch limits in the Gisborne, Canterbury/Marlborough and Westland/Taranaki crayfish areas. All concessions enabling commercial harvesting of undersized crayfish remain, those regulations are scheduled for review later this year.

The multi-stakeholder mangement group reached agreement on single recommendations for CRA 1, 3 and 7, but did not agree on their preferred option for CRA 5 and 9. In CRA 5 and 9 customary and commercial interests, and Ministry officials did not support any reductions to the total allowable catch or total allowable commercial catch.

There are ongoing issues related to the management of our crayfish stocks that need to be addressed this year. Crayfish are a prized shellfish, a taonga, and we need to be sure that the public’s long-term interests are protected and we have reasonable access to our crayfish.

Crayfish are a prized catch and important ecologically so it is critical we protect the fishery from over-exploitation. The Ministry for Primary Industries has just issued proposals for the future management of several fisheries, including the northern crayfish stock called CRA 1. LegaSea again objects to short consultation timeframes, this time we only have 18 working days to review the proposals and submit.

Crayfish might not be on everyone’s catch list but they are a treasured meal when shared with family and friends. Not surprisingly they are also a valuable commercial species so when it comes to management there is always high interest in any catch increases.

In this most recent submission the Council advocates that the size and abundance of crayfish needs to be increased to ensure the public’s recreational and customary needs are met. We need to mitigate the risks associated with low stock levels, and sustain the crayfish stocks for future generations. Currently the Minister seems to have no idea what it’s like to try and gather crayfish from waters that have been hammered in the pursuit of private profits.

A comprehensive Council submission outlining the concerns we have with the ongoing management of our crayfish stocks, and specific comments regarding proposals for the future management of Crayfish 1 (CRA 1), CRA 3, 5, 7 & 9. Nathan Guy, the Minister for Primary Industries, is urged to take a more active management role to ensure the future sustainability of these precious fish stocks.

A brief submission to the Ministry for Primary Industries in response to the proposed future management of CRA3 (Gisborne). The club have a vote of no confidence in the current management of CRA3. The Club note the Ministry and managers have ignored the Club’s CRA3 policy designed to rebuild crayfish numbers and size.

There are a variety of views presented in these submissions by commercial and non-commercial interests. As expected, commercial are committed to protecting and increasing their catch shares in the crayfish stocks. Many submissions from recreational interests express concern about low abundance in their areas.

Discussion document including management proposals for the future management of five crayfish stocks, Crayfish 1 (CRA 1), CRA 3, 5, 7 & 9. These measures are proposed by the National Rock Lobster Management Group. Responding submissions are due with the Ministry for Primary Industries by 17th February 2015.

A letter from the Ministry for Primary Industries advising stakeholders of the discussion document and proposals to review sustainability measures for selected crayfish stocks, Crayfish 1 (CRA 1), CRA 3, 5, 7 & 9. The proposals have been developed by the National Rock Lobster Management Group. Submissions are to be sent to the Ministry by 17th February 2015.

In 2011-12 the recreational catch of crayfish was estimated at 185 tonnes. This compares to a commercial harvest of 2752 tonnes in the same year. About 34% of the recreational catch was taken from waters around the lower half of the North Island. This info and catch estimates for other popular species are in this official survey report. Report: 145 pages. 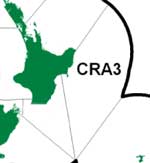 In July 2014 the Gisborne Tatapouri Sports Fishing Club developed a policy for the future management of Crayfish 3, CRA 3. The NZ Sport Fishing Council ratified and adopted the CRA 3 policy at the Annual General Meeting held on 27th September 2014. The goal is to increase the size and abundance of rock lobster, crayfish, in CRA 3, and ensure the needs of customary and amateur fishers are met.

In 2014 the Council advocated that the Minister cannot continue to hide behind the veil of the National Rock Lobster Management Group when it comes to sustainable management of our taonga, our crayfish. Consultation, the science process and ongoing management are being hijacked by a few interested parties, to the detriment of our marine environment.

LegaSea is a public outreach initiative of the New Zealand Sport Fishing Council. The Council has an experienced fisheries management, science, policy and legal team. On behalf of the Council LegaSea provides public-friendly information about a variety of processes that are important to the sustainable management of fisheries for future generations. Updated crayfish news is online at LegaSea.

Between 2010 and 2012 the NZSFC worked with option4 to develop and record management processes for various crayfish stocks. This was a time of great learning and optimism that providing comprehensive feedback would have some positive influence on fisheries management, particularly for our crayfish, our taonga. Despite the lack of any meaningful response, the NZSFC continues to participate in the crayfish management processes in the hope that abundance will be restored and future generations will get to witness a rebuilt and productive marine environment.