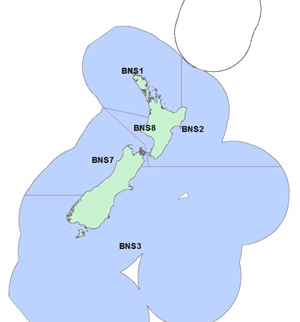 On June 10th the Ministry for Primary Industries (MPI) advised they were consulting on options for the future management of all bluenose fish stocks, except BNS 10.

MPI has proposed three options, one being the status quo, the others require varying rates of cuts to the Total Allowable Commercial Catch (TACC). Submissiion deadline is 11 July 2016.

The New Zealand Sport Fishing Council will be submitting a response to the proposals. We again object to the short consultation timeframe offered by the Ministry. This time we had 21 working days, totally inadequate for us as a volunteer organisation to firstly understand the proposals, prepare a response and then talk with affected members and supporters around the country.

To aid the discussions and to generate feedback the Council compiled a Preliminary View on Bluenose stocks. This outlines the first issues we identified as needing attention. A submission is underway and will be posted online after it has been sent to the Ministry.

Nathan Guy, the Minister for Primary Industries, has followed MPI’s advice and applied Option two, a cut to the Total Allowable Commercial Catch (TACC) of 205 tonnes. Our submission advocated for MPI’s Option three, a 491 tonne cut to the TACC. We remain concerned that bluenose stocks are over-exploited and need to be rebuilt ASAP. [Caution: File size – 8MB]

The Bluenose discussion and recommendations are on pages 78 to 108.

The Ministry for Primary Industries received 10 submissions in response to their proposed three options for the future management of all bluenose fish stocks, except BNS 10. There was one submission from recreational fishing interests, the NZSFC-LegaSea submission. One submission was from customary interests and 8 from commercial interests. Our submission supported the most conservative proposal, a 44% cut to the TACC.

The New Zealand Sport Fishing Council submits in support of the Ministry’s option 3, as a minimum, to rebuild the bluenose fishery to the default target stock size of 40% of unfished biomass, B40. Catch reductions must not be deferred again, as they were in 2013/14, on the promise of more data gathering. Bluenose has all the characteristics of an overexploited stock. It must be rebuilt now.

The New Zealand Sport Fishing Council has reviewed the Ministry’s proposals for the future management of Bluenose stocks BNS 1, 2, 3, 7 & 8. The Council recommends that the Ministry’s option 3 is the best choice for rebuilding the bluenose stocks. Option 3 is a repeat of the reduction that was meant to be applied back in 2013, but that was squashed by industry arguments that the stock was rebuilding and catch rates were improving.

The Ministry for Primary Industries (MPI) proposes three options for the future management of all bluenose fish stocks, except BNS 10. Option one is the status quo. Option two requires a cut to the Total Allowable Commercial Catch (TACC) of 200 tonnes. Option 3 represents a 44% cut to the TACC. MPI is proposing a reduction now and possibly some decision rules that could guide catch setting in the future.

The Ministry for Primary Industries (MPI) advises it is consulting on management measures for a range of fish stocks including Bluenose 1, 2, 3, 7 & 8. Submisison deadline is 11 July, leaving us 21 working days to read the proposals, do our research, consult with our members and supporters and write a submission. From our perspective that timeframe is inadequate and likely unlawful.