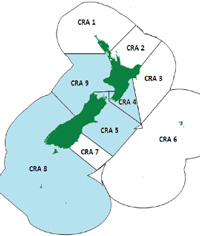 Decreases in the TACC applying in CRA4 (SE North Island) and CRA9 (west coast Kaipara to Franz Josef) are proposed.

The New Zealand Sport Fishing Council submitted its response by the deadline of 11 February 2016.

The New Zealand Sport Fishing Council aspires to have abundant rock lobster (crayfish) populations, but the models and management advice seems to favour maximum exploitation. The Minister has a statutory duty to sustainably manage fisheries to maintain the potential of our fisheries resources to meet the reasonably foreseeable needs of future generations.

Management procedures are used in all of New Zealand’s crayfish stocks. The New Zealand Sport Fishing Council has objected to the application of Management Procedures in our crayfish stocks because they are skewed towards highest possible commercial catch, and they fail to give adequate consideration to the long-term need to sustain the stock and provide for people’s social, economic and cultural wellbeing.

The Ministry for Primary Industries proposes to apply two new Management Procedures in Crayfish 5 (NE South Island) and CRA 8 (SW South Island) to set Total Allowable Catches (TACs).  The Total Allowable Commercial Catch (TACC) will remain the same in these two areas but an increase in the recreational allowance is proposed for CRA5.