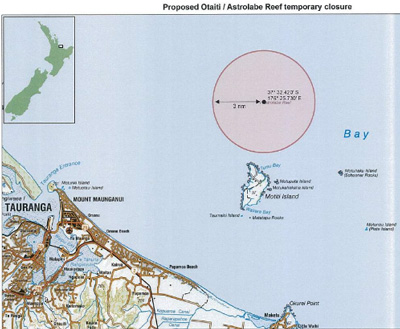 On 12 February 2016 the Ministry for Primary Industries (MPI) advised the Motiti Rohe Moana Trust, on behalf of Nga Hapu o te Moutere o Motiti, had applied for a temporary closure around Astrolable Reef, Bay of Plenty, to the take of all fisheries resources. The application is for a 3-nautical mile radius exclusion zone.

A 2-nautical mile exclusion zone already exists around Astrolabe Reef. This was established by the Bay of Plenty Harbour Master in October 2011 as a result of the MV Rena running aground on the reef. Depending on the outcome of other processes, the Harbour Master could be in a position to adjust or remove the current exclusion zone within the next few months.

The Rena disaster has had a significant social, cultural and economic impact on all fishers in the Bay of Plenty region. NZSFC clubs and members have a long and well documented association with Astrolabe Reef and its fisheries. The Council believes the best way to mitigate the adverse effects of the existing closure on fishers and charter operators is to reopen the area to fishing.

On 14 March 2016 the New Zealand Sport Fishing Council and affiliated Bay of Plenty fishing clubs submitted against the current proposal as the adverse effects of the proposal, on fishing businesses and fishers, outweigh any perceived or real benefit.

The New Zealand Sport Fishing Council and affiliated Bay of Plenty clubs do not support the current proposal to close Astrolabe Reef to all fishing under section 186A of the Fisheries Act. The Council submits the notification and submission period is too short for proper consideration of the resulting social, biological and economic impacts from imposing such a closure.

The Ministry for Primary Industries (MPI) advise a local hapu has applied to close Astrolabe Reef to all fishing under section 186A of the Fisheries Act. MPI request submissions from interested parties before or by 14 March 2016.