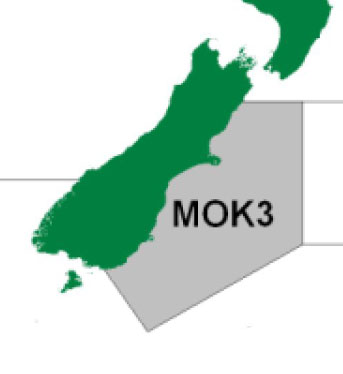 Blue moki is a popular table fish taken by shorebased anglers, set netters and spear fishers around the South Island (Area 3) and lower North Island. An estimated 36,000 blue moki were taken in 1999 by recreational anglers fishing off the east coast of the South Island. That’s around 53 tonnes. Fishers caught another 130 tonnes off the west coast and around the North Island, in Area 1.

Clearly blue moki is a highly valued recreational fishery, so when the Ministry for Primary Industries recently suggested they increase the quota for commercial fishers in Area 3 we said ‘no way’.

Set netting has been banned within four nautical miles of the southeastern coast since 2008. As a consequence recreational catch has plummeted.

Since 2010 commercial fishers have exceeded their quota limits by 25%, while local families are now denied reasonable access to a staple food.

We are concerned that MPI is incentivising overcatch, by rewarding commercial fishers who exceed their limits.

Blue moki is not the first; there have been previous decisions, including snapper and kingfish, where the Minister has raised quota limits in response to excessive commercial harvest.

On August 20 the Minister, Nathan Guy, released his decision for the future management of Blue moki 3. He has followed MPI advice and increased the TACC by 26%, from 127 to 160 tonnes. The Minister has also increased the recreational allowance from 10 to 20 tonnes. The NZSFC team submitted the Minister needed to set aside an allowance of at least 50 tonnes to recognise our interests in this important local fishery. 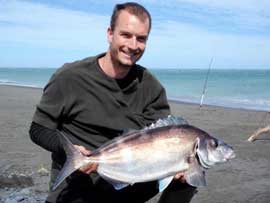 Moki are vulnerable to overfishing

Blue moki are long-lived and vulnerable to overfishing. Stock status is unknown so it is risky to start issuing quota based on commercial overcatch, especially when there is little prospect of any new information being made available, and because the North and South Island fisheries are inseparably linked.

Each Autumn blue moki migrate from the South Island to the east coast of the North Island. Catch in one area will affect the other.

There has been no attempt to assess the likely effects of any catch increases.

MPI propose a new recreational allowance of five or 10 tonnes. A reasonable allowance would be around 50 tonnes.

The recent New Zealand Sport Fishing – LegaSea submission highlights our objections to the Ministry for Primary Industries’ proposals to confiscate the recreational allowance and make it available to quota holders. Commercial fishers have already proven they cannot stick to their lawful catch limits.

On 26 May 2014 the Ministry for Primary Industries released a discussion paper proposing a new Total Allowable Catch (TAC), an increased Total Allowable Commercial Catch (TACC) and initial allowances for recreational and customary fishing interests, and an allowance for fishing related mortality.

Below is a chronological list of the proposal, related documents and our submission.

Blue moki is a highly valued recreational fishery, so when the Ministry for Primary Industries recently suggested they increase the quota for commercial fishers in Area 3 we said ‘no way.

The Minister for Primary Industries, Nathan Guy, has announced he will be increasing the TACC by 27%, from 127 to 160 tonnes, as of 1 October 2014. The NZSFC is disappointed with this decision as it sends a poor message to commercial fishers, that exceeding the TACC will be rewarded with increases in quota.

LegaSea headliners – Why we care about blue moki. July 2014

An easy to read document summarising the main issues relating to the management of blue moki. These issues and much more were highlighted in the formal submission to the Ministry for Primary Industries on 25 June 2014. (see below). These headliners and recommendations are worth a quick read……….

The NZSFC-LegaSea team submits that no change to catch limits ought to be made at this time due to the absence of even basic fishing mortality data. The Ministry for Primary Industries must urgently undertake at-sea catch research to first establish a more reliable estimate of blue moki 3 mortality and catch at age.

The Kaikoura Boating Club has about 400 members and lobbies for the preservation and enhancement of recreational fishing opportunities for its members and their families. The KBC reject both MPI management options and proposes the Minister reduces the blue moki commercial catch limit to previous levels. That would reduce set netting for tarakihi and other bycatch species of blue moki.

In May the Ministry for Primary Industries proposed to increase the quota limit for blue moki 3 because commercial fishers have exceeded their catch limits by 25%. We object because MPI are incentivising overcatch, by rewarding commercial fishers who exceed their lawful limits with extra quota. This is a low quality proposal paper that ought to be rejected by the Minister.

An official document summarising information relating to the blue moki fish stocks around New Zealand, including blue moki 3 (MOK 3). This document includes historic catch data, recreational harvest estimates, biological and stock status information. There is no new data to update the yield estimates provided in the 1996 plenary report. Yield estimates have not changed since the 1992 plenary report, 22 years ago!